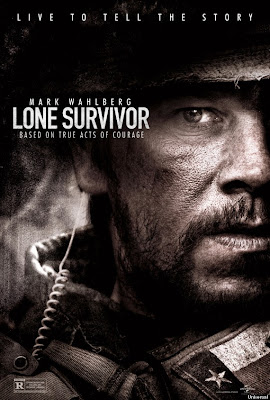 Lone Survivor is a 2013 American war film written and directed by Peter Berg, and starring Mark Wahlberg, Taylor Kitsch, Emile Hirsch, Ben Foster and Eric Bana. The film is based on the 2007 nonfiction book of the same name by Marcus Luttrell and Patrick Robinson. Set during the War in Afghanistan, the film dramatizes the failed United States Navy SEALs mission Operation Red Wings, in which a four-man SEAL team was tasked to capture or kill Taliban leader Ahmad Shah. Lone Survivor opened in limited release in the United States on December 27, 2013, before opening across North America on January 10, 2014. The film received mostly positive reviews; critics praised Berg's direction, as well as the acting, story, visuals and battle sequences. Other reviewers however derided the film for focusing more on its action scenes than on characterization.